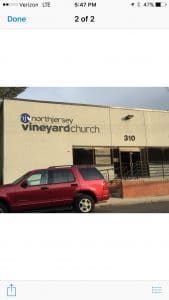 The North Jersey Vineyard Church is pleased to announce that it has settled its lawsuit with the Township of South Hackensack, New Jersey resulting in the Township approving its site plan, allowing it to use its building at 310 Phillips for religious assembly and paying damages and attorney fees. The law firm of Dalton & Tomich PLC proudly represented North Jersey Vineyard in this case.

By way of background, the North Jersey Vineyard Church, formally known as Vineyard Christian Fellowship of Northern New Jersey, Inc. is part of the worldwide Vineyard Christian-based movement and is a religious organization whose principal purpose is to assemble weekly to worship God and engage in a variety of additional religious activities which are customarily associated with houses of worship. The Church was incorporated in November 1996 and had its initial services in January 1997 by Senior Pastor, Phil Chorlian.

On November 18, 2004, the Church entered into a ten-year lease of an 11,150 square feet office building/warehouse located at 370 North Street in nearby Teterboro, New Jersey. In June 2005, the Church began worshipping at the space, welcoming approximately 200 worshipers each Sunday and thus being able to logistically accommodate its entire congregation with one service as the auditorium space contains 260 seats. As of December 2014, the Church welcomes nearly 500 worshipers and is required to split the congregation into four services to accommodate seating and parking requirements.

A vital tenet of the Church is to worship together as one religious family and community. To remedy the issue of not having the Church family worship together, the Church leadership prayed about the concern and has been called to purchase a building large enough to allow its members to worship together as one religious family rather than being spread over four separate services. In 2012, the Church began to look for available real estate in the southern Bergen County area in earnest, as its lease at the existing site was to end in December 2014, and developed the following criteria:

The Church actively searched for a new facility to meet its criteria for several years but could not find one that met the above five requirements because southern Bergen County, the service area of the Church, is fully built out and developed. Then in April 2013, the Church learned of a building located at 310 Phillips Avenue in South Hackensack, New Jersey 07606 (the “Property”), which has been vacant since 2003. The Property consists of 82,212 square feet and sits on slightly less than two acres, has 224 feet of frontage on Phillips Avenue, and an average depth of approximately 345 feet. The existing structure, which shares common parking and a common wall with the building on the adjacent side, consists of 32,060 square feet of floor area. The Property contains 118 parking spaces but also has an access easement to an adjacent lot as well as a lease of 120 additional spaces on Sundays, for a total of 238 available parking spaces.

The SHZO did not allow houses of worship as of right in any zoning district.

Nonetheless, at the conclusion of the August 25, 2014 hearing, ZBA Member Veprek moved “to deny the application because of negative traffic issues through our residential streets and also a negative impact on the rest of the Boswell property and building as well as the residential property to the north and east of the property.” The motion to deny was unanimously approved by the ZBA.

The parties settled the case with the Township agreeing to amend the language of Section 208-8 of the SHZO to allow Houses of Worship as of right in the M Mixed Use District and provided off-street parking requirements of 1 parking space for every 2 sanctuary seats for the entire building of the Houses of Worship. Based on the assurances by the Township that the Church could use and park the building, on June 30, 2015, the Church purchased the Property from SBKJ Associates for $3,000,000. The Church also executed a Parking and Access Easement Agreement (“Parking Agreement and Easement”) with SBKJ Associates allowing each owner of the building use of nearly 250 parking spaces.

The South Hackensack Planning Board Hearing

Since the Property is located in the M Mixed Use District, which now permits Houses of Worship as of right, the Church’s proposed use of the Property as a worship facility is permitted as of right. As such, the Church needed only to obtain Site Plan approval from the Township Planning Board in order to occupy and utilize the Property as a House of Worship. The Church’s Site Plan Application was heard on the evening of August 27, 2015. At 1:55 p.m. on August 27, five and a half hours before the Planning Board meeting began, Township officials for the first time provided the Church’s representatives with the Planning Review of the Township Planner Brigette Bogart.

Contrary to the agreement between the Church and the Township, and in opposition to the Ordinance language itself which clearly provides that the off-street parking requirement for Houses of Worship amounts to “1 space per every two seats in the sanctuary,”) Bogart opined that while the Church met the requirements to park the sanctuary, it was deficient 116 spaces as it needed to provide 1 spot for the remaining 200 square feet of the building. No other use permitted within the M District includes such an onerous combination of requirements to determine the requisite number of parking spaces.

At the hearing, Ms. Bogart explained her rationale regarding the equation she created to calculate the required number of parking spaces:

“[T]he ordinance requires one space for every two seats of the sanctuary, but then it also says that any other use in the M District has a parking requirement of one space for every 200 square feet, which kind of goes to the heart of the ITE, which is when you look at the analysis for spaces per seat, it’s a lot smaller than when you compare it spaces for floor area, which is substantially greater. And this building obviously has a lot more floor area dedicated to other uses than the sanctuary. So I think it would be appropriate to have the analysis from the ITE perspective for gross floor area as well as number of attendees and how that would apply to this side because obviously the number of seats in the sanctuary is literally only a third of what you’re proposing here.”

The actual off-street parking space requirements from the SHZO provide as follows:

More significantly, the Church agreed to settle this case on the condition that the Township amend the SHZO to allow Houses of Worship as of right in the M District and to require Houses of Worship to provide 1 off-street parking space for every 2 seats in the sanctuary.

The Township attempts to take the property by Eminent Domain

On September 10, 2015, the Township Committee adopted Resolution No. 2015-151, which authorizes the “Planning Board to conduct a preliminary investigation to determine whether the proposed area is an area in need to redevelopment [.]” Resolution No. 2015-151 also authorizes the Township’s Planner “to undertake a preliminary investigation to determine whether [certain] properties…qualify as an area in need of redevelopment” under New Jersey Local Redevelopment and Housing Law. One of the properties the Township seeks to qualify as an area in need of redevelopment is the Property the Church recently purchased for $3,000,000. After Resolution 2015-151 was adopted on September 10, 2015, the Planning Board twice postponed and delayed making a decision on the Church’s site plan application.

The Planning Board denies the Church’s Site Plan Application

The following day North Jersey Vineyard filed suit alleging a variety of claims arising under the Religious Land Use and Institutionalized Persons Act. After a year of litigation, the Township approached the Church inquiring about settlement. The parties then resolved the matter whereby the City removed the Property from the Redevelopment Zone, amended its Zoning Ordinance to allow 3 seats in the sanctuary for one parking spot thereby allowing a 717-seat sanctuary and paying damages and attorney fees

The law firm of Dalton & Tomich PLC proudly represented Vineyard Church in this very difficult zoning dispute an is pleased with the result achieved. If your Church, Temple, Mosque or Synagogue has a land use dispute with a municipality, or if your religious school, cemetery, camp, health care facility or sacred area is involved in a dispute with respect to the use of land, please contact Dan Dalton or one of the professionals at Dalton & Tomich PLC to assist you with your case.